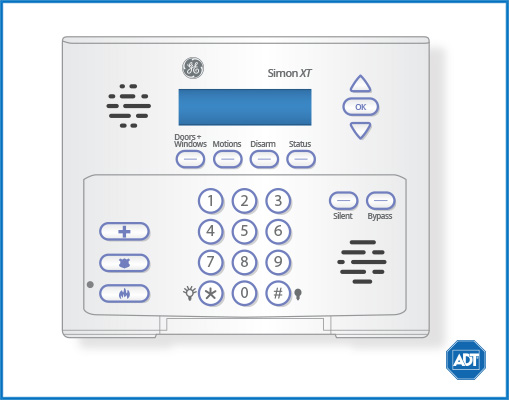 Your security system is made up of a control panel, one or more keypads and various sensors and detectors. The control panel will be mounted out of the way in a utility closet or in a basement.

All the keypads have an audible indicator and command entry keys. The LED keypads have a group of zone and system status lights. The LCD keypad has an alphanumeric liquid crystal display (LCD). The keypad is used to send commands to the system and to display the current system status. The keypad(s) will be mounted in a convenient location inside the protected premises close to the entry/exit door(s).

The security system has several zones of area protection and each of these zones will be connected to one or more sensors (motion detectors, glassbreak detectors, door contacts, etc.). A sensor in alarm will be indicated by the corresponding zone lights flashing on a LED keypad or by written messages on the LCD keypad.

The Simon XT is designed to be as maintenance free as possible, however we suggest that you still test your system once a month and after any alarm occurrences.

Treat the system as you would any other electrical equipment; do not slam protected doors or windows, keep dust from accumulating on the touchpad and sensors, and do not spray water or any liquid on the units.

*Your system may or may not be set up for fire protection.

To arm doors and windows:

Your Simon XT provides a delay after entering or exiting your home before the system is alarmed.

The exit delay is the amount of time the system gives you to exit the home before the system is armed. When the user arms the system, an exit delay starts. During the delay the user can vacate the premises through a delayed response door without causing an alarm.

This feature must be programmed by the installer. IF the system was armed with the No Delay feature activated, there will be no entry delay and the alarm will occur immediately.

The system may protest an arming level change if certain abnormal conditions exist. If a sensor that is active in the requested arming level is open, the system sounds protest beeps and automatically bypasses the open sensor (depending on system configurations).

Allows for a quick exit when one wants to briefly leave the premises (i.e., grab the newspaper) without sounding the alarm. This feature must be programmed by the installer.

Bypassing a sensor allows you to open a protected door/sensor when the system is armed. For example, if you would like for your doors and windows to be armed, but would like the option of opening up a kitchen window without triggering the alarm, you can bypass that window only.

This feature allows you to be notified when anyone enters or exits your home by signaling a chime when a protected area/sensor is opened while the system is disarmed. A solid bell icon will appear in the display when Chime is enabled.

To enable or disable the chime feature:

To turn the door chime function on or off, press and hold the [CHIME] key for 2 seconds or press [*][4].

Your system provides a series of alarms that indicate an usual occurrence. When an alarm is active, the panel displays ALARM ALARM ALARM PRESS STATUS.

Alarms are canceled by entering the valid master user code. This will disarm the system.

Press and hold the [POLICE] button for two seconds (or press twice quickly) to call the central monitoring station and notify them of a nonmedical call for help.

Press and hold the [EMERGENCY] button for two seconds (or press twice quickly) to call the central monitoring station and notify them of a nonmedical call for help.

Press and hold the [FIRE] button for two seconds (or press twice quickly) to call the central monitoring station and notify them of a nonmedical call for help.

Please refer to the Duress Code section below.

This option determines whether or not the panel sounds alarm beeps.

To silence trouble beeps, press [STATUS] or arm/disarm the system.

For a complete list of Trouble Conditions, please refer to the Simon XT Troubleshooting page.

The Simon XT provides a system of codes to be entered when a certain level of authority is required to perform an action. These codes allow you to activate system options, customize panel operations, and generate a silent alarm. Note: any combination of 40 or more key presses (such as fourteen invalid three-digit codes) will cause a system access alarm. The alarm will lock all touchpads for 90 seconds.

You can test your sensors one at a time to make sure they are sending strong signals to the panel. You should test your system often.

To perform a sensor test:

How to Trip a Sensor

You can test the communication between your system and ADT's Central Monitoring Centers.

To perform a communications test:

Your system may have been set up to use a common zone, which is an area shared by users of both partitions, such as a foyer or lobby. If so, please note the following:

You can silence the keypad’s warning tones by pressing the OFF key, but the keypad's message display will remain on as a reminder that you have a low battery condition in one or more of your sensors. When you replace the weak battery with a fresh one, the sensor will send a signal to the control as soon as the sensor is activated (opening/closing of door, window, etc.), causing the warning to be deactivated. If the sensor is not activated, the display will automatically clear within approximately 1 hour.

Try refining your search or check out the suggested topics below: